My Love Affair With Joe (cup of, that is)

I grew up in a country where instant coffee was all the rage. We were logistically so far removed from Europe that the whole latte, cappuccino, decaf movement sailed straight past us until quite late in the 1990’s. 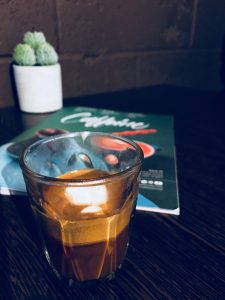 My preferred choices progressed from coffee with Cremora® powdered milk to coffee and a generous serving of condensed milk. The environment I found myself in during the 1980’s did not allow us access to fridges, so fresh milk was never an option. In my early twenties I married my Italian husband who introduced me to the wonders of espresso made in a moka (Italian coffee maker) on the stove at home. These wonder appliances unfortunately do not come equipped with a steam spout used to froth milk so he decided to improvise. He ingeniously merged Irish with Italian by adding whipped cream to a steaming cup of espresso. For the more indulgent moments we melted a block of Bournville dark chocolate in the steaming coffee and then topped it off with whipped cream.

This was pure indulgence which quickly became an after lunch ritual in our household. We may have been strapped for cash during those early years but our fridge was always stocked with fresh whipping cream and chocolate.

Annual month long visits to Italy to see the family meant extended daily invitations for coffee outings. It became commonplace for me to consume up to 7 espresso coffees in a 24 hour period. My relationship with coffee was very intimate at this point in time.

According to the National Geographic magazine, coffee has its origins in Ethiopia where around 800 A.D. Kaldi, a goatherd, noted his flock grazing on the cherry-red berries of a coffee shrub. They seemed to dance from one shrub to another and he decided to nibble on the berries as well. Soon he was dancing with the animals. Witnessing Kaldi’s goatly gambol, a monk gathered berries for his brothers and that evening they were uncannily alert to divine inspiration. History indicates that other Africans of that era used to fuel up on protein-rich coffee-and-animal-fat balls.

Modern day coffee started its journey in Arabia where beans were roasted and brewed around 1000 A.D. By the 13th century Muslims were drinking coffee regularly and wherever the Islamic faith went, coffee was taken too. North Africa, the eastern Mediterranean and India soon adopted coffee drinking ritualistically.

Europe benefited from the coffee bean around 1615 where the Dutch, initially, were the most successful in cultivating the bean. It took many years before the humble coffee bean established in South America and by the 1800’s Brazilians were harvesting mass amounts which turned coffee from an elite indulgence to an everyday elixir, a drink for the people.

Little known facts about coffee
The National Coffee Association of U.S.A. published a fact sheet highlighting the health benefits of coffee. They stipulate that coffee:

Coffee and caffeine consumption
Caffeine is a socially acceptable drug that is widely consumed throughout the world [1]. The effects of caffeine are noticeable on the nervous system. Consumption may result in an increase in heart beat, a heightened state of alertness and dilation of the pupils. These responses are akin to the fight or flight response, where the liver responds by releasing more glucose into the bloodstream and decreases digestive function.

Immediate effects may differ greatly from person to person. Some individuals are less sensitive to these responses whereas many others find that caffeine causes a myriad of undesirable side-effects such as: muscle twitching, anxiety, increased blood pressure, irregular heartbeat, digestive complaints, headache and erratic sleeping patterns.

Caffeine is an accepted component of many athletes’ diet and although it has no nutritional value, coffee and caffeine products are commonly ingested to improve sports performance. This is due to research suggesting the caffeine ingestion improves time to exhaustion and work output during endurance exercise[2]. Using a cup of Java to wake you up for those early race starts certainly has merit if you are normally a late riser. The downside however, is that over-consumption may result in gastric upset and poor hydration status. Caffeine is a naturally occurring diuretic which inhibits sodium (Na+) reabsorption, slowing reabsorption of water by the kidneys. This causes elevated urine flow rate [3], which results in a physiological state of dehydration, an undesirable state for any athlete.

In 2004 WADA (World Anti Doping Agency) decided to remove caffeine from the list of prohibited substances. They considered caffeine to be a weak stimulant with limited performance enhancing affect. It is also difficult to distinguish between normal use and the athlete’s attempt to misuse. Even though caffeine no longer is a banned substance it is still monitored by the WADA.

For the general population a moderate amount of coffee is equivalent to that contained in two cups of coffee in any given day. Individuals who experience side-effects associated with the ingestion of coffee are advised to abstain from all products containing caffeine. Some animal studies have suggested that there is a possible link between caffeine intake and birth defects. This has resulted in the United States Food and Drug Administration recommending that expected mothers avoid or greatly reduce intake during pregnancy.

Nutritionally a cup of black coffee has zero value. When coffee is used as a meal replacement, not only is there no nutritional gain, many physiological pathways may be disrupted. Breakfast choices that include coffee combined with refined carbohydrate products that are calorie dense and nutrient deplete may be a contributing factor in the increasing incidence of ill health. This may be especially pertinent to the current focus on stabilising blood sugar.

Ralph Golan, MD, in his book Optimal Wellness states that the following symptoms are associated with caffeine toxicity:

Some people may enjoy coffee purely for the taste and choose to have a cup a day or two once in a while. They do not get coffee “cravings” and do not need caffeine as a “pick me up”. For these select members of the human race caffeine may be harmless and pose no ill effects. However, knowing that coffee beans are mass produced in countries where there may be no strict herbicide and pesticide plantation regulations, one may consider the long term health implications of consuming a beverage that offers no direct nutritional value. Healthier herbal tea alternatives are now widely distributed and sold. Combining these options with nutrient dense food choices may be one small step towards greater personal health and wellbeing.

To order a copy of my book click here, visit Amazon or the book section or your local vendor.